Love him or hate him, Quentin Tarantino knows a thing or two about movies – and he’s not shy about sharing. Now, Tarantino has spread his movie knowledge and love in a new book, “Cinema Speculation.” This book is in the style of film writers such as J. Hoberman, and has Tarantino exploring several films from the ’70s; films like “Dirty Harry” and “Taxi Driver.” As is always the case with Tarantino, some of his ideas are really here (for example: he says that the wonderful “Friends of Eddie Coyle” is “excessive,” which, no). But Tarantino’s wild ideas are part of his mystique, and even if you don’t agree with him, he often backs them up with his reasoning. Those who can’t stand Tarantino and his whole aura won’t want to go near “Cinema Speculation,” but film fans are in for a treat here. (Chris Evangelista)

The Big Bang Theory: The Authentic Inside Story of the Epic Hit Series 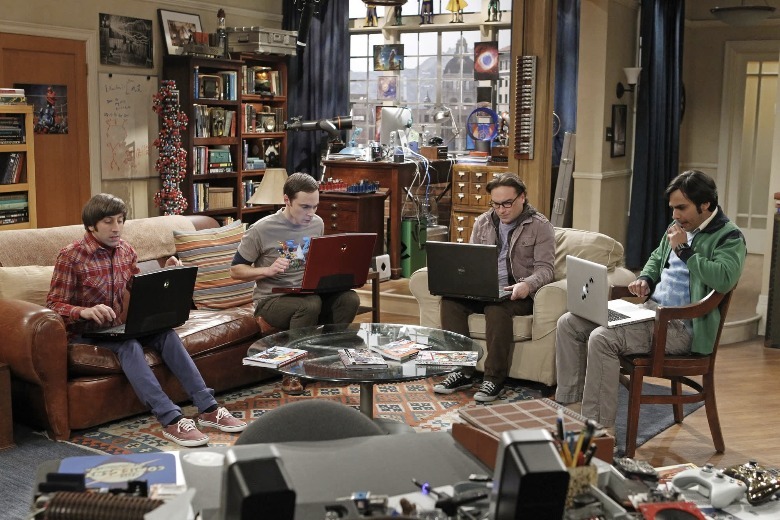 Do you have “Big Bang Theory” in your life? Don’t worry, we won’t judge you if you do. In fact, we have the perfect gift in mind. This “access to all” oral history of the comedy series features creators Chuck Lorre and Bill Prady, and stars Jim Parsons, Johnny Galecki, Kaley Cuoco, and more as they look back on the creation of the show. This account is as legit as it gets, from its initial creation to its series finale after twelve seasons. There’s a ton for fans and casual TV enthusiasts to learn in this deep dive series, including many details you’ve never heard before. Although the book has some behind-the-scenes drama, it ultimately serves as a love letter to a show that continues to be an example of how impactful a simple television sitcom can be. (Erin Brady) 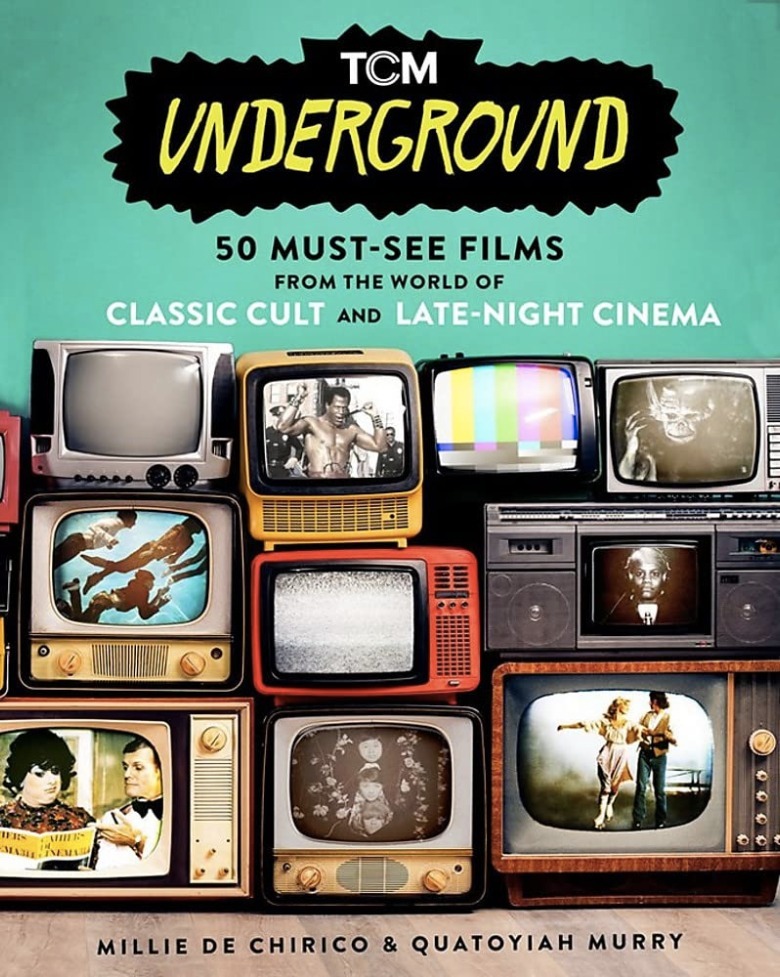 Distribution algorithms have been great at making sure films find their audience, but we’ve lost the magic that video stores and syndicated TV programming provide that often introduce viewers to all kinds of wild, weird, and wonderful films they might not otherwise look for. themselves. For cord cutters who yearn for the days of “TCM Underground” the late-night cult movie show that aired on Turner Classic Movies every Friday, you’re in luck. This holiday season welcomes the book “TCM Underground: 50 Must-See Films from the World of Classic Cult and Late-Night Cinema.” This book is not a laundry list either, because it also includes reviews, behind-the-scenes recaps, and great photography to celebrate some of the most unique and infamous films from around the world, such as “Ganja and Hess,” “The Decline of Western Civilization,” “Hausu,” “Possession, “Beyond the Valley of the Dolls,” “Xanadu,” and the works of John Waters. This is the perfect guide for movie lovers who want to explore the cinematic world of camp, kitsch, horror, schlock, and unforgettable films that have to be seen to be believed. (BJ Colangelo) 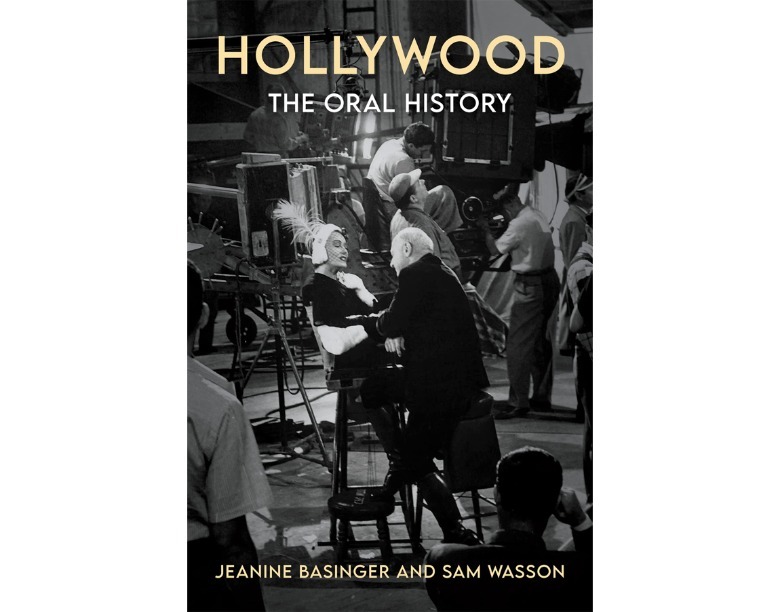 As much as filmmakers enjoy crafting “love letters to cinema” every time awards season rolls around (which, by my reckoning, is right now!), no fictional story can compete with the real-world history behind Hollywood. The industry has undergone dramatic changes over the decades, to say the least, from filmmaking methods and styles to the popular studios of filmmakers growing and falling into the inner relationship of the art form with current social and political movements. There are precious few figures left who could literally witness that chaos, but fortunately, most of them have been brought together to contribute to “Hollywood: An Oral History.” The American Film Institute opened its interview vaults for readers to get a fresh look at the inside story of the movie industry – from famous figures past and present. An important book, written by film scholar Jeanine Basinger and author Sam Wasson, compiles no less than 400 thoughts on industry titans to paint an unforgettable picture of Hollywood as a whole. Treat yourself (or a loved one) this holiday season and get a copy now! (Jeremy Mathai)

Masters of Make-Up Effects: A Century of Practical Art 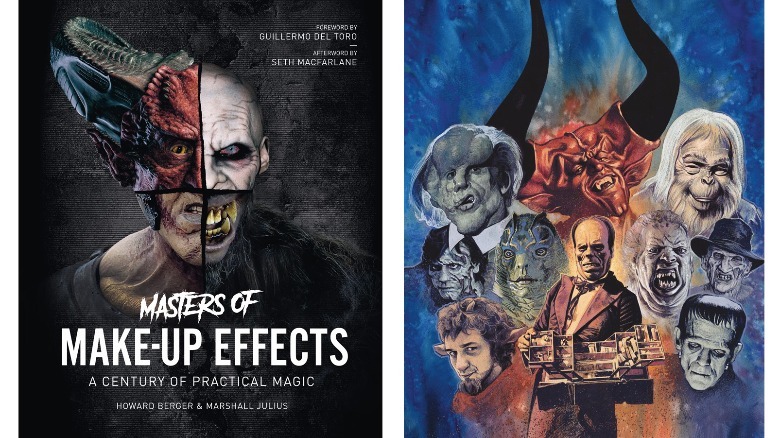 There are few visual experiences as amazing as witnessing the transformation of a player into an out-of-this-world creature using visual FX and a little elbow grease. With a foreword by Guillermo del Toro and a background by Seth MacFarlane, “Masters of Make-Up Effects: A Century of Performing Arts” is an amazing book that celebrates the incredible talents of makeup and makeup FX artists from the world of film and television. . Contributed by authors Howard Berger and Marshall Julius, the book includes hundreds of behind-the-scenes photos and first-hand accounts of how some of the most memorable creations came to be. This book covers a wide range of genres, including films such as “Planet of the Apes,” “An American Werewolf in London,” “The Thing,” “Star Trek,” “Star Wars,” “Harry Potter” franchise, “Dune.” and the Marvel Cinematic Universe. More than 50 effects makeup legends and makeup artists (such as Doug Jones, Robert Englund, and Doug Bradley) contributed to this book, making this the most in-depth look at the movie makeup industry. This is an absolute must read for visual FX lovers and admirers of the art behind movie magic. (BJ Colangelo)

Also Read :  Anya Taylor-Joy Recalls Being Bullied for Her Looks

Mad Dreams and Monsters: The Art of Phil Tippett and Tippett Studio 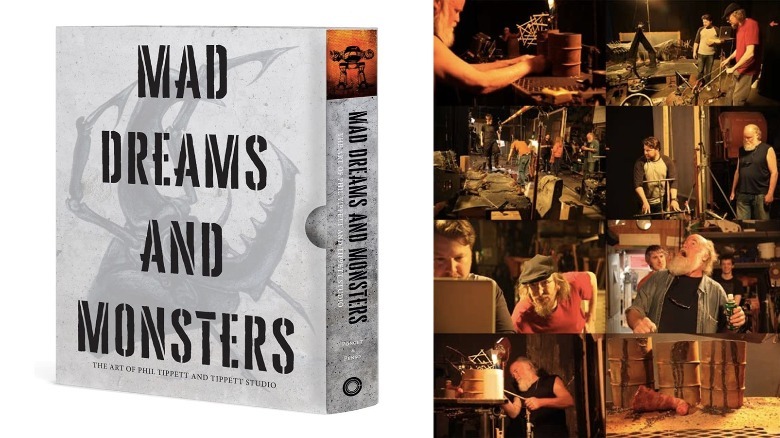 The father of the AT-AT, ED-209, bugs from “Starship Troopers,” and the man the internet likes to describe as “only one job, Phil” as the Dinosaur Commander in “Jurassic Park” by Steven Spielberg. a sense of the community of the effects of the film. Now Phil Tippett has released a beautiful, high-end book with behind-the-scenes footage and decades of information called “Mad Dreams and Monsters” that covers everything from “Star Wars” to “RoboCop” all the way to him. the recent surreal stop-motion feature, “Mad Gods.” Written by Gilles Penso, this special hardcover edition comes packed with thousands of never-before-seen images and is sure to make any big movie date in your life. (Eric Vespe)

Directed by James Burrows: Fifty years of stories from the legendary Taxi Driver, Cheers, Frasier, Friends, Will & Grace, and more. 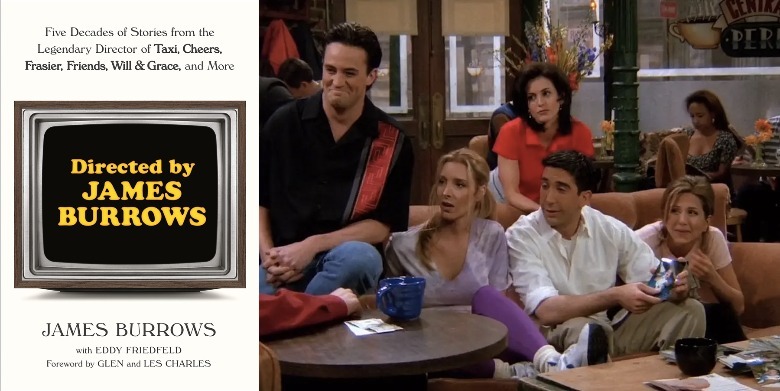 As much as we movie and TV buffs talk about movie directors, we spend very little time discussing full-time TV assistants. There are some with special abilities there, too, including the legendary James Burrows. The “Cheers” creator has been calling the shots on television since the 1970s, from classic sitcoms like “The Mary Tyler Moore Show” and “Taxi,” to “Frasier,” “Will & Grace,” and “Mike & Molly.” In total, he directed more than 1,000 (!) TV episodes over nearly 50 years. As you can imagine, he’s someone who has a lot of knowledge to offer in the entertainment industry – not to mention a lot of behind-the-scenes stories that have never been made public before. For more, you should check out his memoir, “Directed by James Burrows.” (Sandy Schaefer)

Office BFFs: Office Tales From Best Friends Who Were There 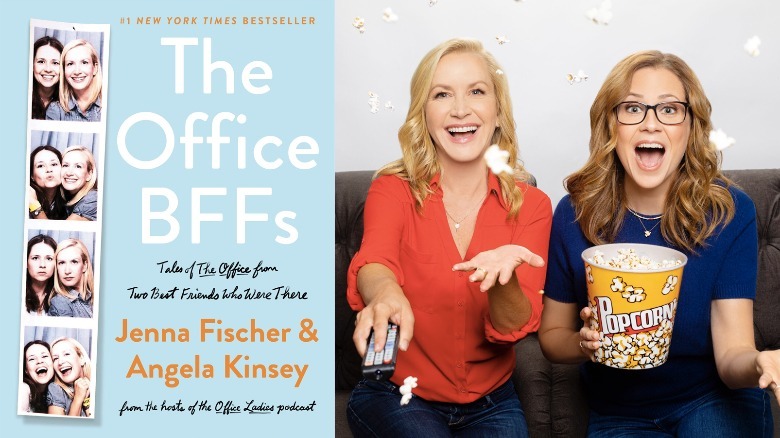 If you haven’t heard, “The Office” stars Jenna Fischer and Angela Kinsey host a podcast called The Office Ladies, where the two actors go into all the details behind their time as Pam. and Angela in the comedy series. If the podcast isn’t enough for you, the two have been paired with a book that digs deeper into the two stars’ true friendship alongside their time spent at Dunder Mifflin Paper Company. These two are absolutely hilarious, and you can feel the love they had for their co-stars and characters, so this will be a treat for all the “Office” fans in your life. (Ethan Anderton) 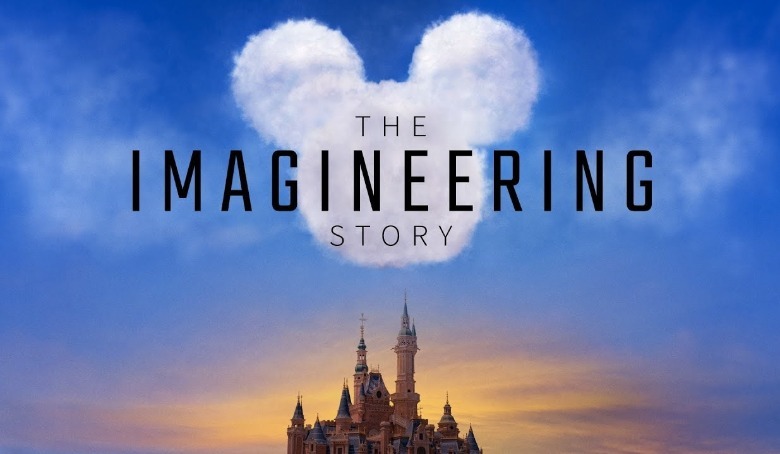 Theme park design is one of the most unsung art forms, and no one has done more to advance the medium and define the modern era than Disney’s Imagineers Parks. This group of designers, engineers, artists, and artisans represents an entirely unique collective with an ambitious goal: storytellers from diverse backgrounds creating worlds for people to explore and enjoy.

The story of Disney’s Imagineers was written in the light series “Imagine Story” on Disney +, and now, the filmmaker Leslie Iwerks has turned his filmmaking into a book. And you’ll be happy to know that it’s the kind of book that can be used instead of a big brick if push comes to shove – at 752 pages, this is the kind of comprehensive tome that any Disney theme park fan needs on their shelves. .

Honestly, a book like this has been written for a long time. While there have been many books written by individual thinkers and tons of coffee table publications collecting the concept and art behind the scenes, the full story of how theme park design grew and found its voice beginning in the 1950s has yet to be collected in one place. This is the kind of story that is not only important to theme park fans, but is important to understanding the voice of the Disney company, and how our love of the immersive experience has grown. (Jacob’s Hall) 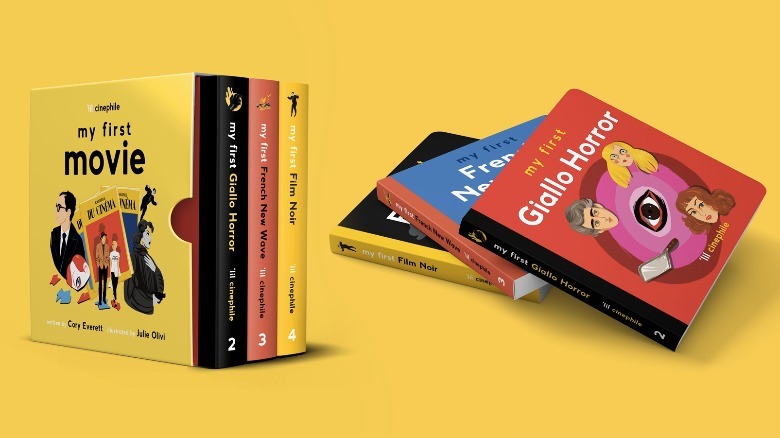 It’s never too late to teach your kids about real cinema, and that’s why Cinephile (the people behind the card game of the same name) is releasing a series of books aimed at teaching them about a few popular genres. “My First Movie” is the first volume in a series of brightly colored books covering the characteristics and themes of the French New Wave, Film Noir, and Giallo Horror. 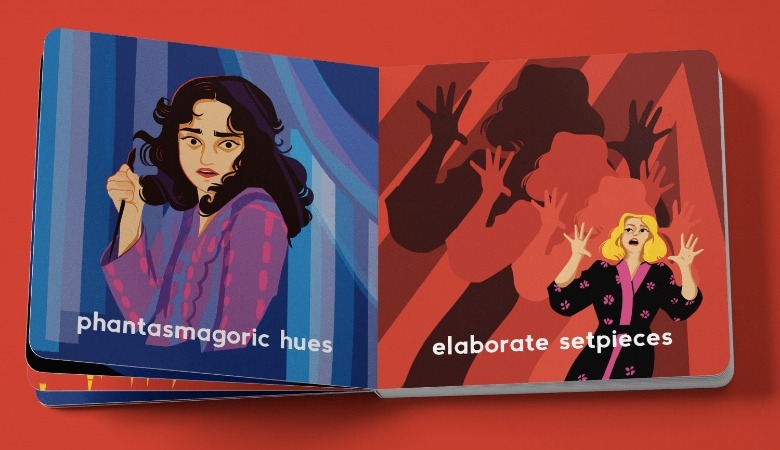 If you want more convincing, the official website of this book series has many praises from Edgar Wright, David Lowery, and Alex Ross Perry, and a number of other critics and experts of pop culture. Head over to Cinephile to grab the box set or pick up one of the books yourself if you’re up for it. There are also bundles that include prints with artwork from the book. Enjoy! (Ethan Anderton)